A quick report from Siggraph, now I’m finally over the jet lag.  Much to our surprise we went straight into a press interview on arrival at the conference and conducted a fair few more over the following days with assorted Internet and paper based press. All thanks to our gracious hosts FACEWARE, who’s booth we spent a large proportion of the conference at. We were very excited to see our test shot playing on their booth on arrival (pics below) , particularly as we hadn’t planned to attend Sigraph until next year.  We spent a few hours each day wandering around the show seeing what tasty software morsels we could add to to our ever growing shopping list. It was great seeing what’s out there at the moment and chatting to people about new methods and software that could benefit our ambitious pipeline. And we came away with quite a shopping list of new toys for the production. Having a project such as ours in full swing helped a lot, as we were able to engage on a production level and go straight to the nuts and bolts of production problems and requirements, rather than simply being a university asking for freebies. Alex managed to secure quite a few potential new sponsors, proving himself time and time again to be a honed conference panther. 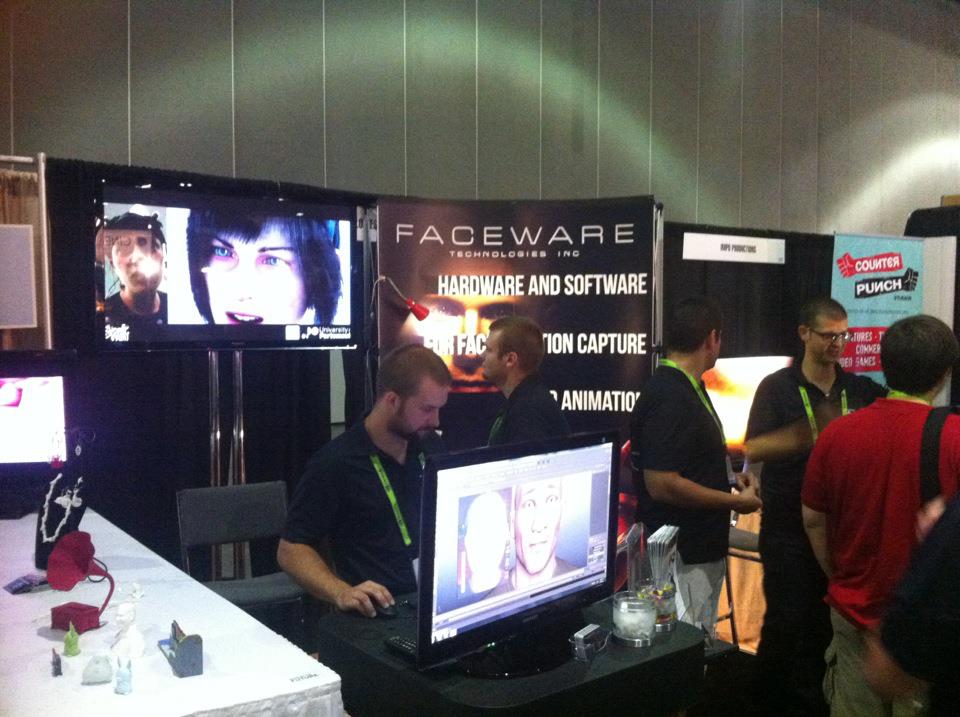 We were lucky enough to attend some fantastic after show events and got to see Digital Domain’s capture stage, where we witnessed the new Vicon software in operation with real time performance capture and what appeared to be a rock-solid real-time skeleton solve, (convincingly illustrated by a writhing pile of mo-cap zombies). I was also pleased to find out that our patented Egghead TM technology for visualising facial performance on pre-viz mocap puppets is almost identical to the process Digital Domain use. Although I thought ours had a better name.
We also got to attend some useful talks. Of particular note was Pixar’s pipeline talk on Brave, which gave us some great ideas for our pipeline and was the only illustration of a complete creative film pipeline on show at Siggraph. It encompassed the whole film making proses, from concept and ADR through to final render/composite; particularly  useful, as our organisation has a lot more in common with Pixar than most other VFX houses; as we are effectively producing our own in-house script/storyboard/concept art/costume design/performances/direction/sound design/music etc. It highlighted some specific design areas we need to address on our production, particularly  in the areas of costume design and cinematography. It also illustrated some interesting ways their concept team feeds back and forward with the VFX team. It was a very fluid work flow, that kept the dialogue going well past the initial concept phase and allowed the artists to negotiate creative elements that responded to the constraints and problems of high end CG production. They also had a miracle solution for making large amounts of controllable foliage called “Wondermoss”. A solution  that everyone, including us, was clearly in awe of. Unfortunately it transpired that it can only be made if you have a crew member that can think in binary 24/7 and views the world as a network of intertwined mathematical algorithms; Never mind then.
For the rest of the show Alex and I attended as many after show events as we could. Some were quite an eyeopener, as we dived into the world of the LA party networking scene, where the hunt for the next rung on the career ladder is always on and it’s best not to mention your humble origins, lest the attendant gaze drift to tastier prey on the next table.  As a result we decided a more suitable title for LA would be the “City of Angles”, as most of these party angels seemed to have an agenda. Maybe we were just too British. Either way we both agreed that it definitely wasn’t for us.
Jet lag aside, we came back with quite a glow, as we’d received a fair few complements about the student work and a lot more press coverage than we’d ever imagined. The FACEWARE guys made our experience at the show most enjoyable, as did VICON and SHOTGUN, who were both very accommodating and we’ll hopefully see them all next year with an even better batch of work. So roll on next year’s show, but with maybe slightly less evenings out and more cups of tea in our hotel.