Skip to content
The production hit a very important mile stone this month. We produced our first shot, only a test shot, but it proved we can do it and more importantly get to the quality level we need to with the staff and equipment we have.  We feel the CG characters captured the performances we got on the day from Becky and Dave and the emotion comes across, which for me is the cornerstone of the whole process. It was very exciting and not a little nerve wrecking to see the first attempt at our CG Stina channeling Becky.
We worked very intensively for 4 weeks and produced around 4 minutes of footage. We decided on this test shot after being invited to show some work as part of the University’s end of year degree show for the BA Animation and Film in Soho, London, which is at the heart of the British film industry. This was a fantastic opportunity for us, but it carried with it a very tight deadline of 4 weeks. It was a chance to show off our work to the top people in the VFX industry, so we set about recruiting the keenest and some would say most fool hardy members of FOAM for a slice of true film production crunch-time.

The team who worked on it comprised of representatives from all of our departments, some of whom unfortunately didn’t get to show their work at the show; some shots were cut due to assorted software and hardware issues (VUE, you’re on your last warning) The teams worked incredibly hard, often  having to deal with completely new methods and software on their own, as Alex and i were swamped with managing the pipeline. Particularly towards the end of the 4 weeks, as the deadline loomed, they worked fantastically under pressure and left most of the swearing to me and Alex, well mostly to Alex.

We were all very proud of the result and the majority of feedback we received was very complementary. Many of the industry people were surprised we could produce work of such quality in such a short amount of time, the cloth particularly drew a lot of attention.  The lack of context of the shot created a few problems, as a few people found the edit confusing, as much of what was contained obviously had no precedent and forms part of a much longer scene.  As a result our next release will be a stand-alone trailer that’s a bit easier to digest.

Thanks go to all our sponsors for the software we used on this shot, particularly to FACEWARE,  who’s software allowed us to complete 4 minutes of high quality facial animation with only a handful of junior animators and 1 senior animator in 4 weeks. So here is the clip in question.

We still have some distance to travel before the look is completely what we want. Gunter is in need of a facelift and we didn’t get time to do any atmospherics etc. We plan to use this shot as a testbed for new systems and techniques. Watch this space for updated versions to see how we’re getting along. Here’s a concept of what we’re aiming for in the next pass: 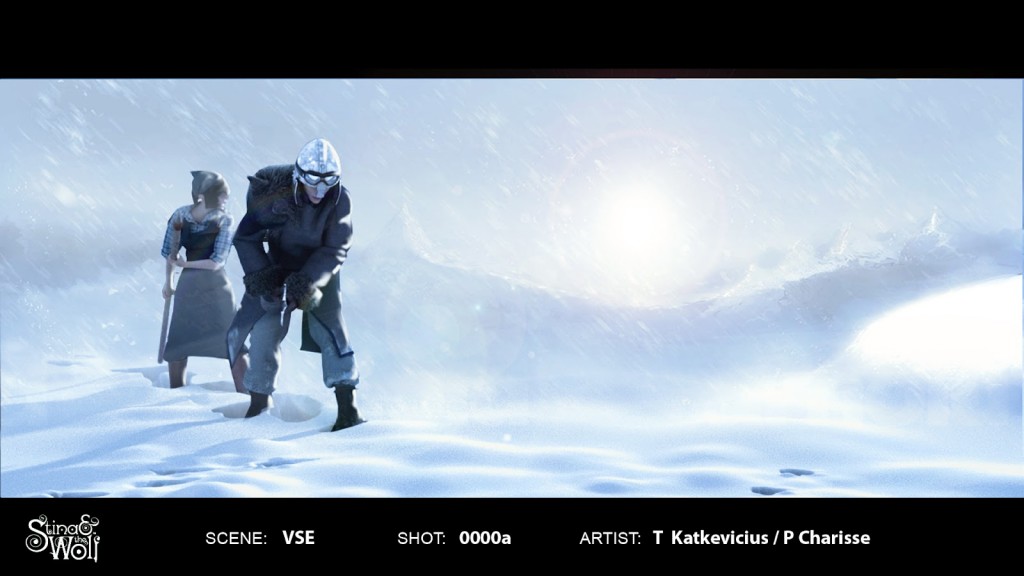 In further news, we now have Solid Angle on board as a partner, which we’re very excited about as we used their incredible ARNOLD rendering software for the demo shot (it’s only a beta version, hence the word ARNOLD on every shot, but full versions are on there way) and are optimistic that the University has now decided to use this renderer as a core package. This will allow us to have an in-house render farm which should make rendering the whole film to the quality levels of the demo shot and beyond within our reach. For the demo shot we were also incredibly fortunate, as the University had just purchased 25 Alienware super-power gaming computers that needed a home until they could be properly installed; We gave them a home, for 4 weeks, and made sure they were thoroughly bedded in :).

And lastly, FACWARE have offered us the chance to be their launch project for their new educational program. As a result Alex and I are flying out to SIGGRAPH in LA next week to talk about the facial animation we’ve done and hopefully spread the word about the project. Maybe even find a few more sponsors 🙂
Paul