As a follow on from my previous blog about the exciting future of the Stina project, I thought I’d write a bit about the Hollywood screenwriting rabbit hole I fell down that prompted not only endless rewrites after we’d shot the film, but almost managed to mangle the original idea. 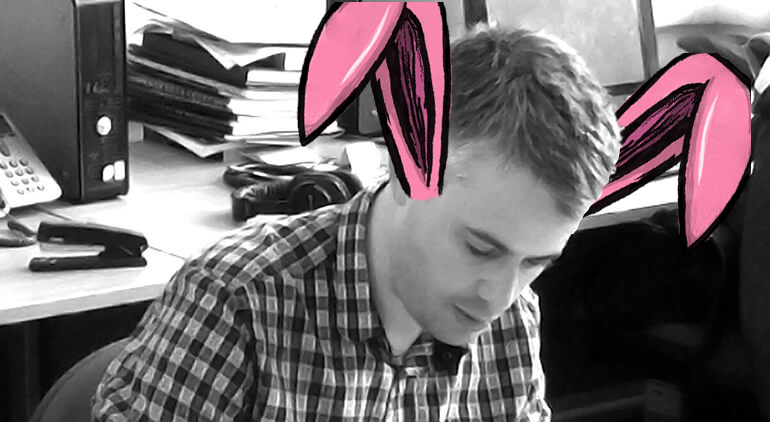 The author with rabbit ears.

I’m not alone in this; it’s a very modern phenomenon. We live in a time where virtually every specialist area you can think of has a head-spinning amount of youtube and other online tuition and master classes to immerse yourself in. In my case it was the craft of screenwriting, which is very much a learned craft. Having a “great idea for a movie!” is one of the smallest aspects of what finally translates into a good screenplay and ultimately a good film. A very simple and derivative idea can make an amazing film if structured well with great dialogue and characters, and a great idea can make a dreadful film if the former falls flat. This is great advice. The problem is there is an almost infinite wealth of “great advice” out there on screenwriting, and not all of it will fit every type of film project. In fact, as I eventually realised, the majority of advice out there relates to a very specific type of film: A Hollywood hit.

In the case of the Stina script, (and in the case of most screenplays worth anything.) the magic happens in the rewrites. I’ve been studying screenwriting and writing screenplays for quiet a few years now, and my drafts for this script were well into double figures. The excellent  writer/director Thomas Paul Anderson captures the process:

“Screenwriting is like ironing. You move forward a little bit and go back and smooth things out.”

The first draft is a blueprint, hopefully an inspiring one, full of loads of ideas and a solid basic structure, (depending on how detailed your outlining was) but with lots left to discover about the characters and their journeys. Often characters will get themselves to a point in the writing where they need to take a different direction to the one you had mapped out for them; it’s a cliche, but they do often take on a life of their own and move in unexpected ways you have to follow, and this often has knock-on effects in other parts of script that need constant revision if you want stay true to the character’s journey. (I found this a lot in a more recent project: “DEAD HEAD WOOD”, even whilst doing the pre-viz, where I ended up constantly feeding back scene-by-scene into the script.)

It’s from this position on the Stina project that I found myself rewriting dialogue and often whole scenes, even after our first rehearsals, always chasing “perfection”. The trick here is knowing when to stop; this should be when the film is working and carry’s your themes as effectively as it can. That’s not as easy as it sounds, as you can often get too close to a project and perspective can be hard to find. Of course, an end point should definitely come after you finally shoot it; that’s it, that’s the end. It is what it is, now the editing takes over. But that is when I fell down the rabbit hole.

Hollywood films serve a function. They are a specific product, for a specific audience and generally require a specific formula. Many are clearly excellent films, but it’s a mistake to think they encompass all good filmmaking has to offer. (Cannes Film Festival anyone?) This is especially relevant if you’re attempting to explore ideas and forms that don’t necessarily embrace the mainstream and the biggest potential audiences. (Not to mention the direction funding inevitably squeezes a writer in. Being a writer and a producer aren’t always happy bedfellows!) In our case, the first cut I had of the film, made from footage of the Mocap shoot and storyboards had really captured the atmosphere, characters and themes of the original idea, but sacrificed some of the structural tidiness and accessibility of a Hollywood movie. This was reflected in early feedback I had from some professional screenwriters. The problem I then encountered was one inherent to all feedback: What do you do with it? It was really useful feedback, but how do you use it to improve your work constructively? For example, how would some of my favourite authors have reacted to the sensibilities of a modern writing workshop? The author Page Turner:

In my case I started voraciously consuming any and all industry advice videos, taking courses and seeking tips everywhere I could about how I could rewrite the “perfect” screenplay; with a plan to reshoot it one day, in a mythical future when I could make it all as a multi-million dollar live action feature. (And i’m really not getting any younger!) The problem with this is that I never looked at the small print: the places I was looking held the keys to the Hollywood “correct” process; how to make an entirely enjoyable and entirely tidy film that will work for the most number people built on foundations of proven storytelling methods. Sounds great doesn’t it? But were all of my favourite films really “enjoyable” in the traditional Hollywood sense? And would they fit neatly, or at all into the structural templates used by Hollywood screenwriters? (Good luck fitting “Mulholland Drive” into the cookie cutter) “Stina & the Wolf” was now being unwittingly reshaped into a movie format that could never express the strangeness, otherness and ambiguities of my original Idea.

In the end it’s a confidence thing. I had a strong idea of theme, story and character and the first cut was pretty close in most areas, it just needed a few extra scenes and a few tweaks, but the feedback had knocked me sideways, and instead of just applying the fixes it needed and moving on, down the rabbit hole I went. I became increasingly obsessed with completing every character’s arc neatly, structuring every beat to hit the Hollywood defined structure and comparing my film to others that were regarded as perfect examples of the craft; all great films, but all bearing absolutely no relationship to my original vision.

What I finally ended up with was a dense story overcrowded with detail and ideas. It tried to complete every character arc, tidy up every loose end, destroy every ambiguity, justify every aspect of every character’s motivation, and left no space for the other-worldly inexplicable melancholy of the original; it wasn’t dreamlike, it had no yearning for meaning beyond what was seen and squeezed out most of what I loved about the early cut.  But by that point my confidence was shot. And in tandem with it becoming increasingly clear that the technology we needed was still no where near affordable enough, I all but abandoned the project.

But it was saved; partly by what I touched on in my last post: Current technology finally getting to the place where it is entirely possible to complete a film like this. But you need more than that to drive you to make a film. It’s often a seemingly impossibly difficult task, so you have to really want to make it. It has to be special.

I decided, a few months ago to watch the last cut I had made before the endless rewrites, just me and my partner. I’d done it so long ago I figured it would be like watching someone else’s film. It was a cut I dimly remembered getting very emotional about at the time. I knew I had already added the few additions it needed to make it work, before disappearing down the rewriting rabbit hole never to return.

On rewatching it, it brought me close to tears, it just felt right, it didn’t need all the other bumf i’d added to flesh everything out to the point of bursting. Even though it was just a bunch of kids in Mocap suits and some pencil storyboards it stayed with me for days. It didn’t hit every beat of a 3 or 5 act structure, didn’t contain every archetype of Joseph Campbell’s “the hero’s journey” and left some characters almost entirely arc free, but it made me want to cry. It was truthful; not just to my original vision, but to the characters, and to life. That’s all it ever needed.

So now we’re all very excited, as not only do we have a story (we always did) and performances that express the original vision, we now have the tech to make it visually stunning, and actually finish it!

And the moral of all this, if there is one: Trust your instincts. Feedback used wisely is invaluable, but the best critic of your work is always you, you just need time, a lot of it sometimes, to see if what you really wanted to do, under all the fluff and nonsense, is actually there. Is it actually present in what you made? Is it truthful?

If it makes you cry, it’s working.

It’s clearly important to learn as many of the rules and formula of your art form as you can, especially with something as craft-dependant as screenwriting, but only to the point you are actually improving, not suffocating or entirely changing what you originally set out to express.

And as a final thought: Here’s one of my heroes: Kurt Vonnegut, on top comedy form exploring Shakespeare and Kafka completely failing to craft the “perfect” story: