Since making the decision to make “Stina & the Wolf” as a completely live-action feature film, we have had to totally rethink our approach to the project. We have a wealth of concept art, as well as a script we are very confident in, (and that has ticked the required industry boxes) and a 2-hour mocap/storyboard rough-cut of the whole film made with our amazing original Stina actress: Becky Waldron, and a great ensemble cast that will serve as a template for what we want to achieve story and performance-wise. 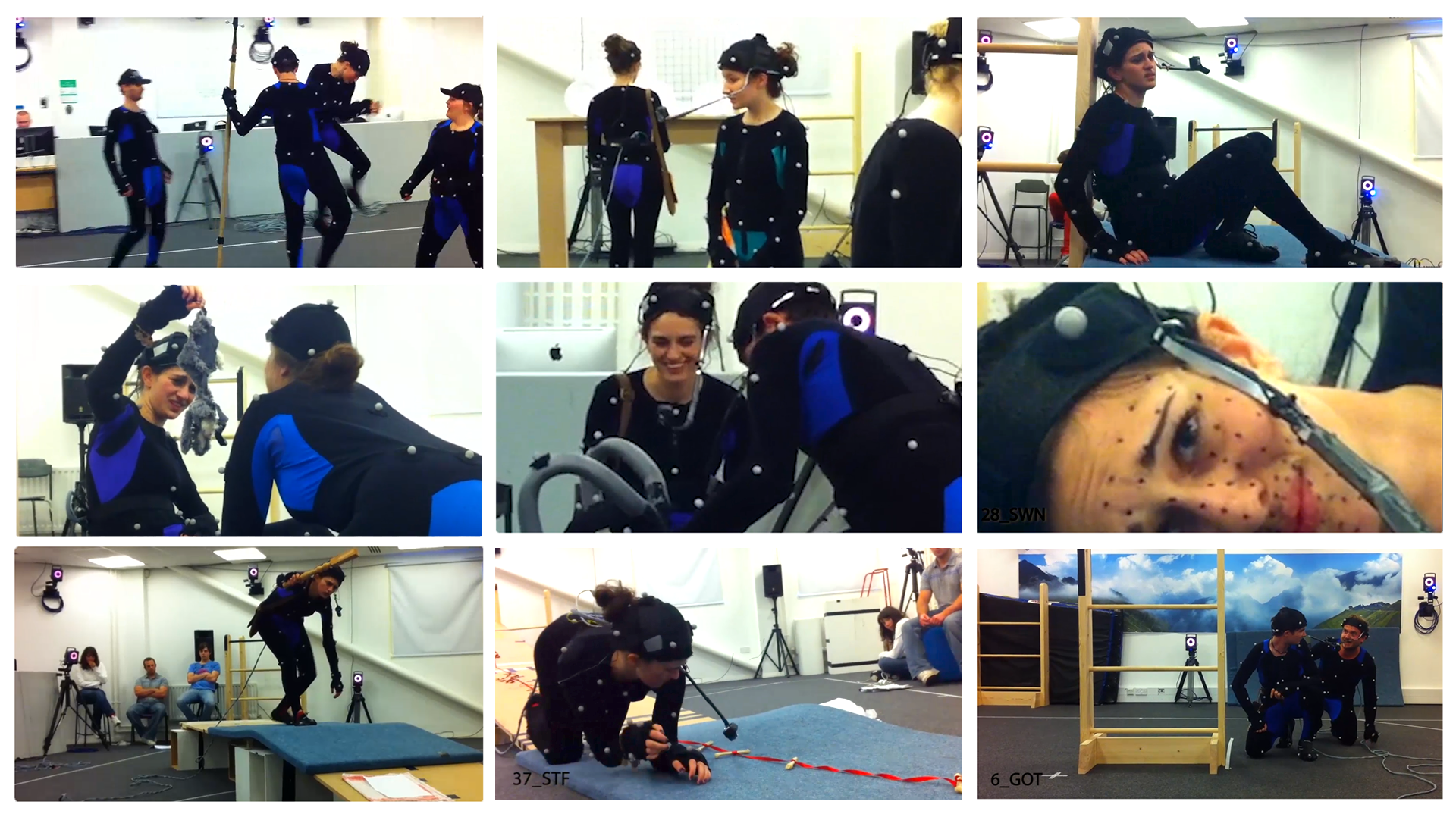 Stills from the “Stina and the Wolf ” Mocap Drama Cut

Concept art from “Stina and the Wolf “

Concept art from “Stina and the Wolf “

The first big question we had to ask ourselves was: Where on earth is Stina’s world? CGI and matte paintings allow for limitless freedom of imagination, but the real world has limits, (and permit requirements!) and initially I wasn’t convinced there was anywhere that could match up to our original concepts, with its combination of lush grass, absurdly high vistas, huge clouds, and often snowy peaks all in the same shot. So our first task was scourer the world for this mythical place. We spent the first few months location scouting and begin the long process of creating a completely new, live-action budget from scratch. The needs of an animated film and a live-action film are very different, and this has been a massive learning curve, as well as a very complex and detail ridden process (Involving spreadsheets bigger than I ever thought were humanly possible!)

A seasoned producer I’ve been working with on another live-action feature I’m directing (A US production, temporarily stalled, unfortunately, due to COVID19) has been giving me some invaluable guidance into the complex world of live-action feature planning and budgeting. Our plan has been to come up with a number of different budget versions for different marketplaces and see what looks feasible in the current climate (post-lockdown, obviously!) It has also been a useful exercise in assessing whether the film we want to make is even possible with the kind of budgets we could realistically achieve. (There is a distinct chance that this film may have to wait on entering full production until a few other projects have wrapped, so the director can accrue enough industry cachet to get a budget high enough to do it justice! There is no point in making this feature unless it can realise at least some of its potential on the big screen.)

As well as being a planning and logistics exercise, this process has been really useful for drilling down into the detail of the creative decisions you need to make as a live-action filmmaker: on everything from the artistic and practical (and cost!) implications of production design, to the cinematography potential of locations, right down to the nuts and bolts of day-to-day shooting: “are there any toilets nearby?” , “is there an interior shoot we could do that day if it rains on our exterior location?” , “Are you actually allowed to fly drones there anyway? It’s next to an airport!”. It’s all a very different world from the one I’d previously inhabited (where most production questions seem to boil down to: “Can we get a bigger render farm?”.) One exciting thing that has happened during this process is that we have really taken the scenes and locations off the page and placed them into the world; as they go from ideas packed with potential to real, tangible places. And boy did we find some amazing places!

The most expensive part of a live-action film process is the shoot. The more money you have the more locations you can have and the more expensive actors you can have etc. etc. One big factor in keeping the cost down is to have as few locations as possible; so we had to first nail down our biggest issue:

Where are we going to shoot? Does the location we want even exist in our world?

..and if so, how easy is it to get there? And how many days shooting could we really afford? For us, a big challenge was to find places that captured the grandeur and beauty of our CGI visualisations, but wouldn’t require the same expensive CGI heavy augmentations of a James Cameron film. This was one of the main problems with the CGI Stina (and the main reason we switched to live-action): there was no real way of it not costing the same as Avatar! Also, how do you location scout with next-to-no pre-production budget?  This is where technology stepped in. We are now at the point in computer graphics where you can visit, in virtual reality, almost any place on earth. So that’s what we did. I have a Vive VR headset, and using the amazing Google Earth VR we set about travelling around the world looking at hundreds and hundreds of different locations. 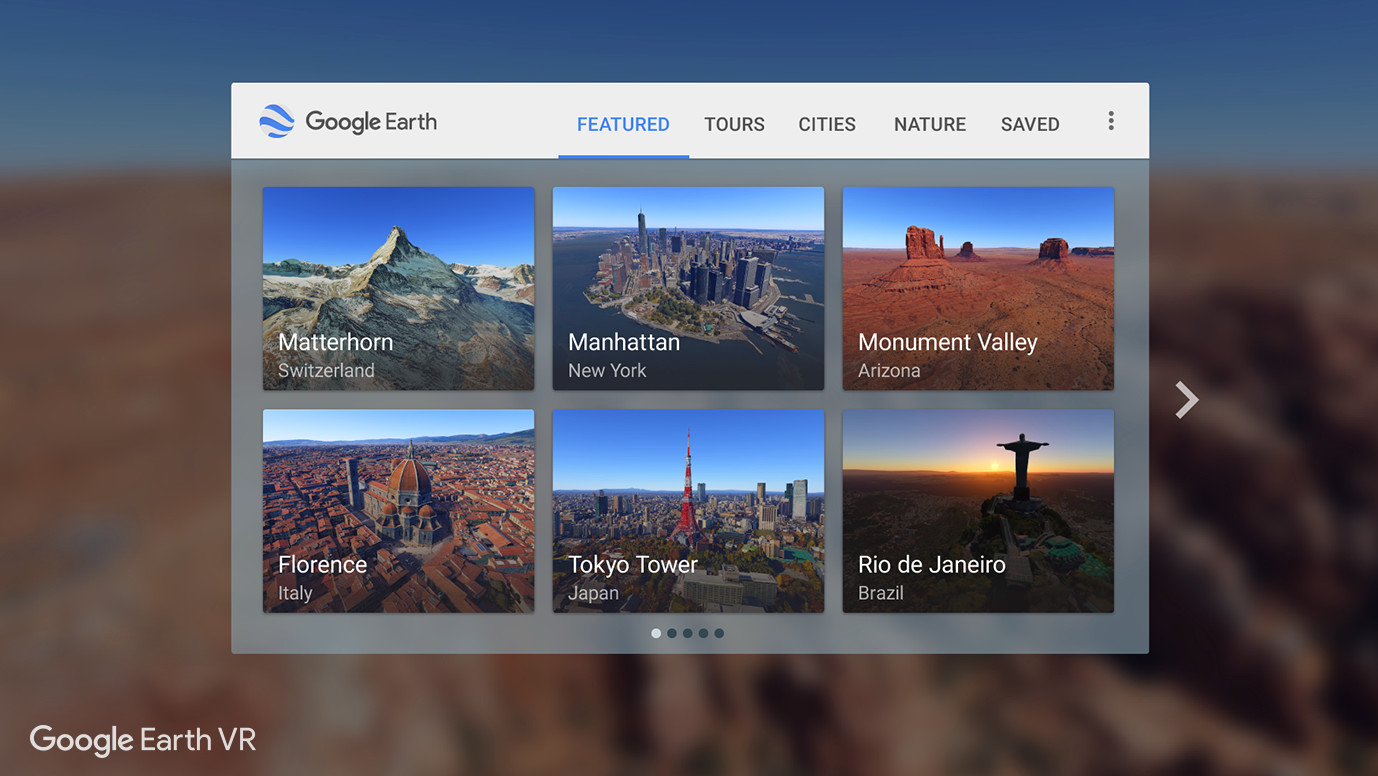 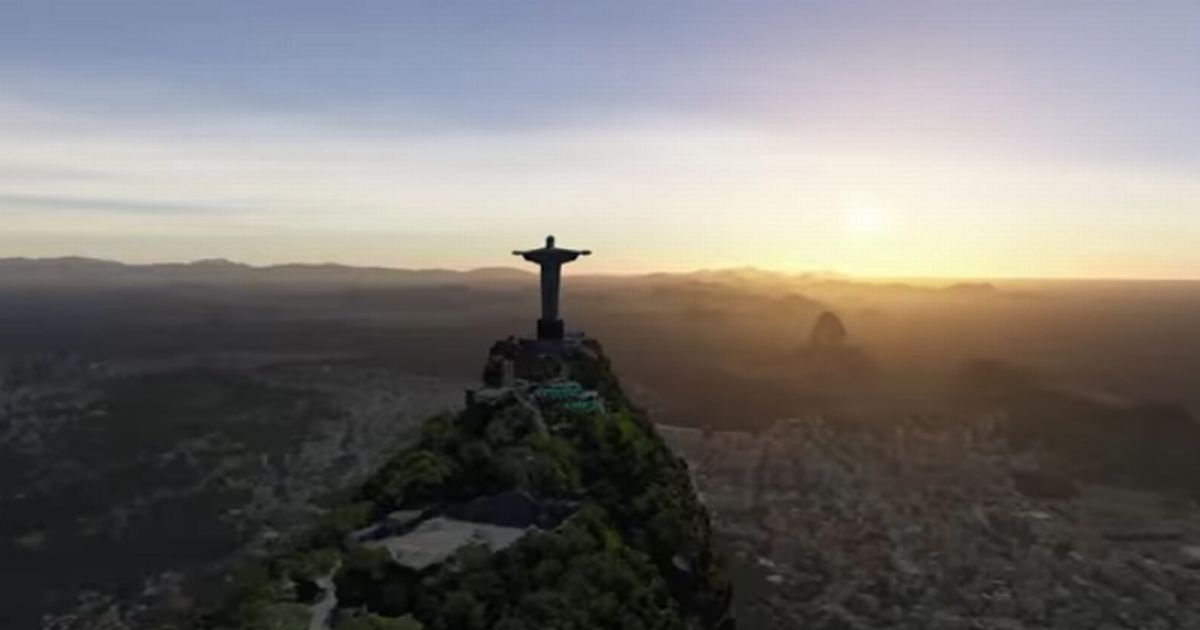 Good VR can really give you a sense of place and scale. The ability of Google Earth to change the time of day even allowed us to make decisions based on our cinematography style; we could check instantly whether the sunset would fall over the right mountain, or even if we could get the natural rim-lighting we are after with mountainous ariel occlusion fading off behind us.

So, after months of searching through Europe, Asia, America (and of course New Zealand!), we found Stina’s world: the Bernese Alps in Switzerland. There is something about the combination of extreme verticality, not present anywhere else in Europe, and the simultaneous existence of lush green grass and epic snowy peaks that just made it perfect. This is Stina’s world. With a few CGI tweaks (a couple of buildings and a cable car removed and a light grade) we are already in Stina’s original field: 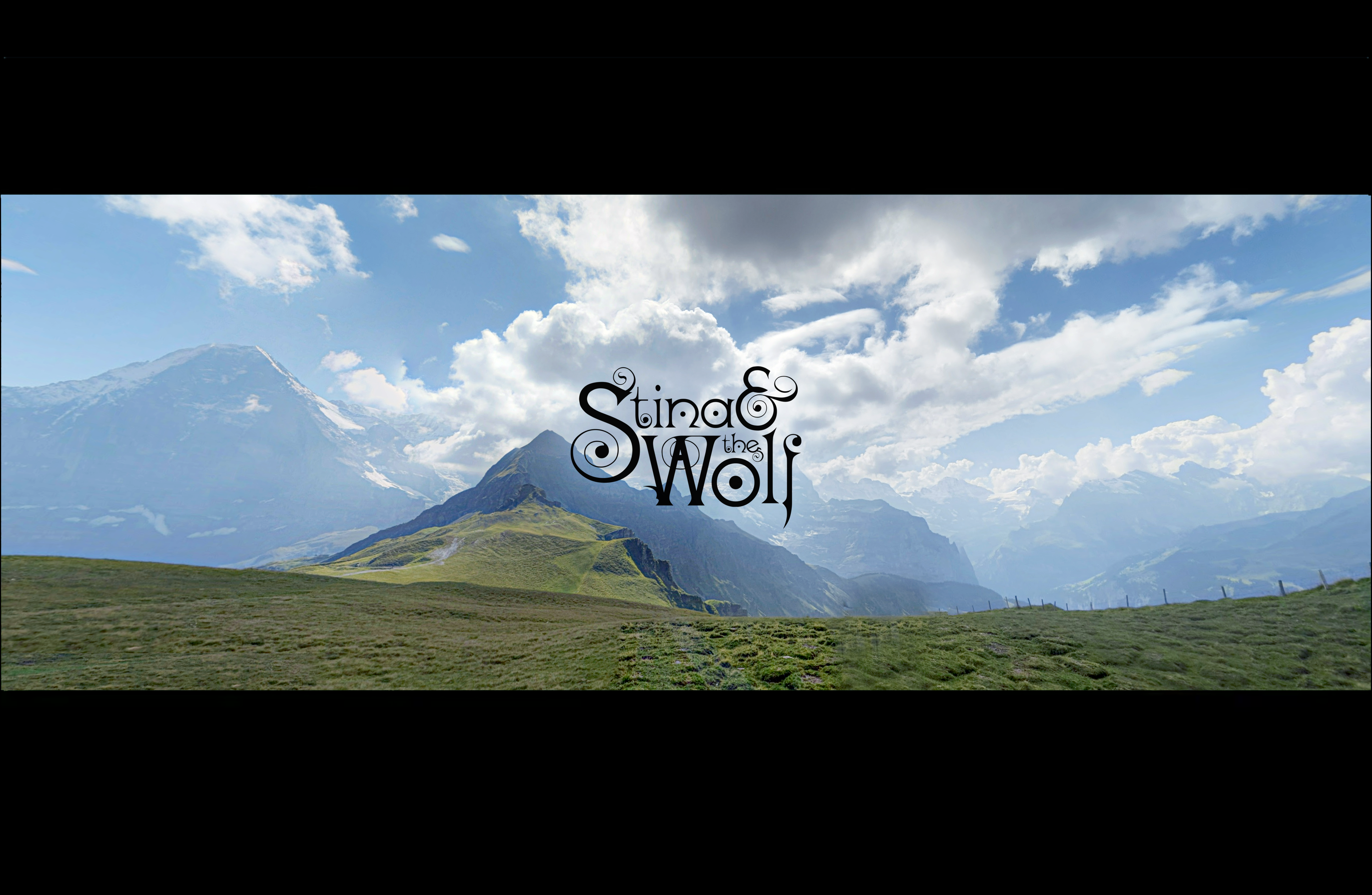 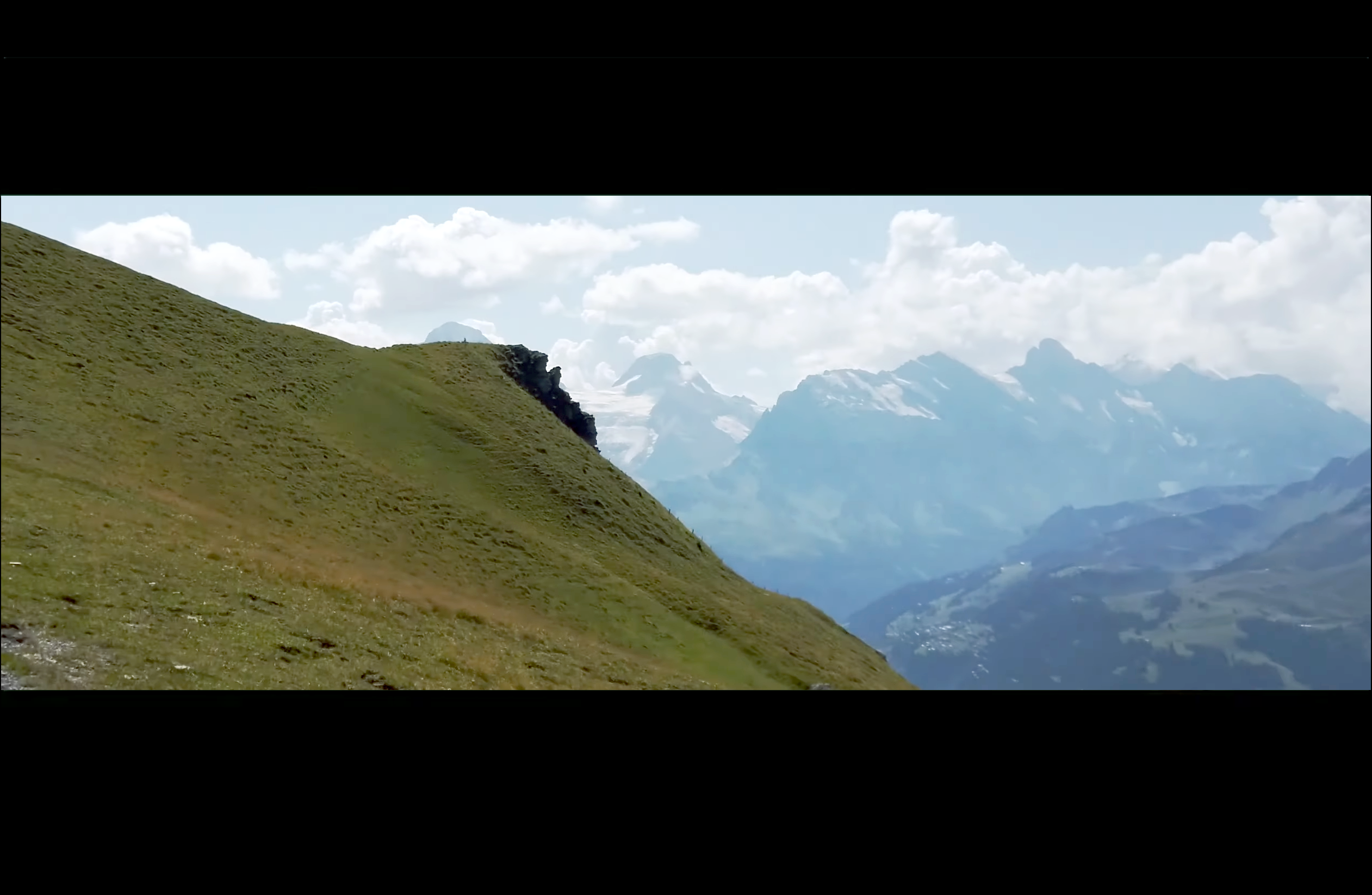 Now that we had the country, the next process was to go through every single scene in the film and match it with a specific location that was feasible to work in, film in and travel to, all from a single (and not too expensive!) central location. We decided on an area of about 30 miles in diameter in the middle of the Berneses Alps that had everything we needed and was easily accessible: Lush green meadows, Stina’s aunt’s house (filming permissions pending) snowy mountain tops, epic vistas. The locations have a sense of both immense beauty and peace, and the sublime terror and sense of overwhelming insignificance you get when you put tiny little humans in ridiculously big mountain ranges; it’s a place where you could be at total peace one minute and overwhelmed by terror the next.

I had planned to travel to the location for a few weeks of real scouting in May (as visiting a location is a must for logistical as well as artistic planning) but unfortunately Switzerland was one of the first countries to fall prey to COVID 19, so will be visiting after the lockdown ends.

Here are a few of the stunning Berneses Alps locations courtesy of Goole Earth 360°. We scoured every corner of the earth for Stina’s homeworld, and we found it 🙂

With all the locations bookmarked in one place, we now have an easy way to measure distances, check accessibility, plot routes and share information with the entire cast and crew from anywhere: 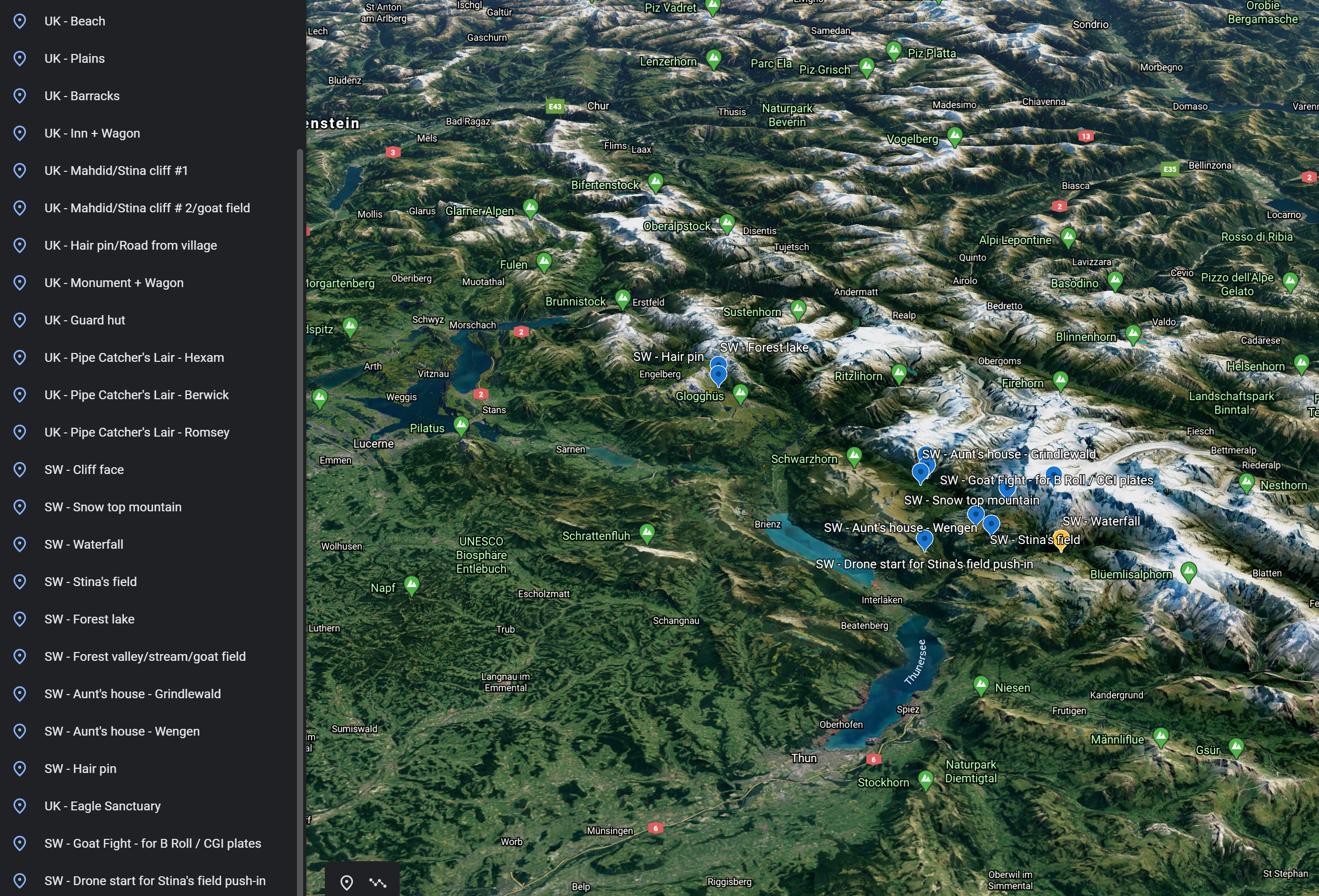 Switzerland is an undeniably expensive country to shoot in, so one of the first decisions we made was to find a location in the UK to do all the filming in where the script doesn’t actually require us to look at the mountain environment. As well as interior scenes, If someone is walking down a road with a cliff behind them, but no vista, It makes sense to get your eye-candy B Roll to cut-in from the expensive location using as few actors and crew as possible, whilst you do all your close-ups etc. where it’s cheaper (being careful to match the light of course; Milton Keynes Waitrose car park in November will never feel like the Swiss Alps in May!) So we settled on 2 locations. We are hoping to take advantage of some tax breaks to help budget the film as a joint Swiss-UK production.  I won’t be revealing where the UK location is yet, as it’s subject to negotiations with assorted parties about filming permission, so may move, but we’re hoping it will be in north England, close to the Scottish border.

We are now at the stage where we have a good idea of total shooting days (8 in Swizerland/27 in the UK) and detailed breakdowns of every location, set, prop, costume, actor, CGI/practical effect, and travel requirement for every scene. The next stage is to drill down even further into the real detail of costings and logistics (what kind of filling would you like in your sandwich Mr Director? Lobster Thermidor?) and see what figures we end up with. Once that’s completed, we can start chipping away to get our various different budget proposals to match with different market places, and move forward to the finance and fund-raising stages.

Planning a film of this scope is by far the most complex (and sometimes overwhelmingly imposable seeming)  thing I have ever attempted, but with every location found, every corner cut to save a little bit more money, every tiny, seemingly insignificant detail ticked off, it all, very slowly, seems more and more feasible.

(if anyone wants to start looking into this process for their own projects, the book to start with, and that was recommended by my experienced producer friend is “Film and Video budgets by Deke Simon”: a tome that’s simultaneously terrifying, and reassuringly detailed and informative.)